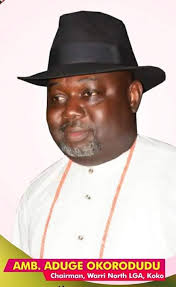 After spending three nights in captivity, the chairman of Warri North Local Government Area of Delta State, Hon. Aduge Okorodudu, who was kidnapped on Saturday while returning from the State Congress of the Peoples Democratic Party (PDP) has been released.

The Commissioner of Police in the state, Mr. Hafiz Inuwa, confirmed the release of the chairman.

He was reportedly released in the early hours of Tuesday.

Okorodudu was kidnapped by some yet-to-be identified gunmen along Mbiaku Link Road in Warri GRA.

The council chairman, who was in company of his driver, was ambushed by the gunmen who shot his driver before taking their victim away.

Though some sources close.to the chairman claimed that ransom was paid, there were no official confirmation as at press time.