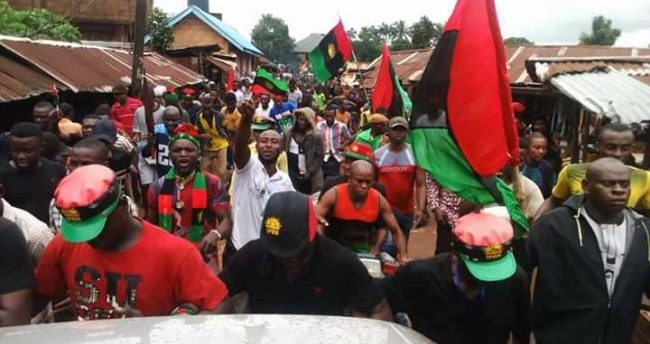 Several people are feared killed following a bloody clash involving members of the Indigenous People of Biafra (IPOB) and operatives of the Department of State Service (DSS) at Emene, Enugu state.

Sources claimed that trouble started at about 7.00am when some security operatives stormed an IPOB gathering at Community Secondary School Emene and attempted to disperse the group and make arrests.

The encounter was said to have turned bloody when members of the pro-Biafran group overpowered the security agents and went ahead to sack Emene police station.

The situation apparently made the security men to re-mobilise as a dozen patrol vans loaded with well armed security agents comprising police, army and DSS arrived the scene and turned their guns on the IPOB members.

In the ensuing melee, sounds of gunfire and teargas fumes filled the axis between St Patrick Secondary School and St Joseph Catholic Church along the old Abakaliki Road.

Those close to the scene of the incident claimed that premises of St. Patrick Secondary School was “flowing with blood” as fleeing IPOB members were pursued into the school.

Even those who were headed for morning services had to run for their lives as fumes from teargas canisters literally took over the environment.

The police is yet to officially respond to the situation as at press time.