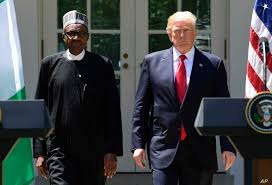 Killing of Christians: What I discussed with Trump by Buhari

President Muhammadu Buhari on Tuesday identified “cultural problems” as the major reason why Christians in Nigeria usually become victims of clashes in some parts of the country.

The president said killing of Christians has nothing to do with ethnicity or religion.

The president who took time to narrate his discussion of President Donald Trump of the United States who had once accused him of killing Christians in Nigeria, said most of the clashes stemmed from the constant between cattle-herders and farmers.

“President Trump had once called him into his office at the White House and asked me, “why are you killing Christians?”

“Though, I was pained by the allegation, I still took my time to explain to him that the killings of Christians in Nigeria has got nothing to do with ethnicity or religion.”

“I made it clear to him that the problem stemmed from constant clashes between cattle-herders and farmers; it is basically a cultural” problem.

President Buhari went ahead to also blame the farmer-herder clashes on “climate change and population growth” as well as the “leadership failure” of previous governments.

The President, in his closing remark at the retreat, said, “I believe I was about the only African amongst the least developed countries that the President of the United States invited and when I was in his office, only myself and himself, only God is a witness, he looked at me in the face and said, ‘Why are you killing Christians?’

“I wondered if it were you, I wondered how you will react. I hope what I was feeling inside did not betray me before him. So, I understood it.

“The problem between cattle-rearers and stagnant farmers, I know which is older than me, not to talk of him, because I think I’m a couple of years older than him, were happening. And there was climate change and population growth and the culture of the cattle rearers.

“I tried to explain to him that it has got nothing to do with ethnicity or religion. It is a cultural thing which respective leaderships failed the nation.”

Earlier in his speech, Buhari said his regime had made progress on all fronts in spite of challenges.

He further listed the deradicalisation of terrorists, fight against corruption, amongst others as his second-term achievements.

“We have made progress on the railway project with a view to connecting the country. The Lagos-Ibadan rail line is up and working. The Abuja-Kaduna rail line is efficiently working. Arrangements are being made to complete the Port Harcourt to Maiduguri line which will connect the South-Eastern states to the Northern states.

“Work is ongoing on the Second Niger Bridge and it is 46 per cent up to completion. We hope to commission the project before the end of our tenure in 2023.

“Our anti-corruption fight requires no emphasis. We have made concerted efforts to build strong institutional capacities in the fight against corruption by strengthening our anti-corruption agencies including the Economic and Financial Crimes Commission, Independent Corrupt Practices, and Other Related Offences Commission.

“We have also worked to address emergence cases of insecurity and insurgency in the country with innovative approaches such as Operation Safe Corridor which deradicalise, rehabilitate and reintegrate willingly surrendered Boko Haram members into the larger society,” he explained.

The President also said his regime “hopes to get rid of bandits, kidnappers, and other criminal elements” in the country.