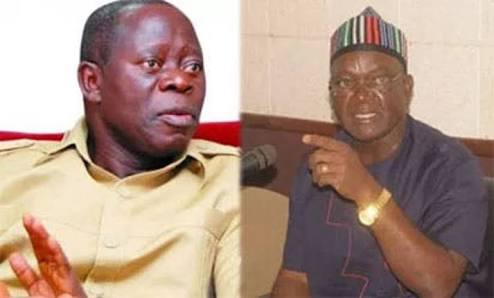 ‎Benue State governor, Samuel Ortom, on Wednesday said he is ready to forgive a former Chairman of the All Progressives Congress, Adams Oshiomhole, if he apologises to him.

Ortom spoke during the distribution of 46 vehicles to the 23 local government chairmen and leaders of the state House of Assembly in Makurdi.

O‎shiomhole had sought an out-of-court settlement during the further hearing of the N10bn libel suit Ortom filed against him at the state High Court in Makurdi on Tuesday.

Ortom had filed the libel suit against Oshiomhole after he, as APC chairman, accused the governor of having a hand in the death of two Catholic priests and other parishioners at Mbalom community, Gwer East Local Government Area of Benue State on the grounds that one of the priests preached a ‘very critical sermon’ against him (Ortom)’.

The presiding judge, Justice Augustine Ityonyiman, had adjourned the case till October 29, 2020, for the report of settlement.

Reacting to Oshiomhole’s request for out-of-court settlement, Ortom said, “I am a Christian and the Bible says forgive us our trespasses as we forgive those who trespass against us.

“So, if your brother offends you and comes back to apologise, you will forgive. Moreover the conditions are there, and I know that I was innocent even when he made all those allegations.

“If he comes back now to tender an apology to me and also go back to the same news medium that he used to scandalise and vilify me to have the apology published and also meet the condition set by my lawyers, I will certainly forgive him.”‎

12 NYSC members get married during service year in Anambra