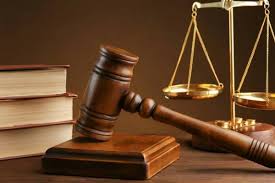 ‎An Oyo State  High Court sitting in Ibadan has sentenced one Bolaji Salami to prison for fraud.
‎
Salami was prosecuted by the Ibadan Zonal Office of the Economic and Financial Crimes Commission on amended one-count charge of obtaining money by false pretences contrary to Section 419 of the Criminal Code Cap. 38, Laws of Oyo State 2000.

The charge read, “That you, Bolaji Salami, sometime in March in Ibadan, with intent to defraud, obtained various gift cards, worth the sum of $150 from one Smith Johnson, a white male American citizen, when you falsely represented to him that you are a white female American by name Angelina James, that you are in love with him and wanted to marry him, which representations you knew to be false and thereby committed an offence.”

The convict pleaded guilty to the offence following which Justice Sherifat Adeyemi pronounced him guilty as charged and sentenced him to six months’ imprisonment with effect from his June 30 date of arrest.

In addition, Salami was asked to restitute his victim the sum of $150 and forfeit his iPhone X Max, Itel mobile phones and HP laptop computer to the Federal Government.

In the same vein, Justice Patricia Ajoku of the Federal High Court, Ibadan, on Wednesday, sentenced Olanrewaju Olatunji, a.k.a. Mia Cruz, to one year imprisonment for fraud.

Olatunji was prosecuted by the Ibadan Zonal Office of the EFCC on amended one-count charge of criminal impersonation.

He pleaded guilty to the charge upon which the prosecution counsel, Mabas Mabur, prayed the court to sentence and convict him accordingly.

The judge sentenced him to one year imprisonment with effect from February 13, the day of his arrest, while he was also asked to restitute $1,600 to his victim through the EFCC, and forfeit his Honda Crosstour and other items to the Federal Government.    ‎

#EndSARS: One Die, Five on danger list as protesters, hoodlums clash in Benin