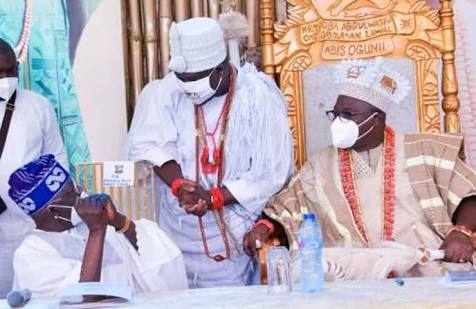 ‎
‎A former Minister of Aviation, ‎Femi Fani-Kayode, has blasted former Lagos State governor, Bola Tinubu, for failing to stand up to greet the Ooni of Ife during the coronation of the Oniru of Iruland in Lagos earlier in the week.

The Ooni had arrived the event when Tinubu and other dignitaries were already seated at the high table. ‎
‎
He stopped to greet Tinubu but the former governor did not stand up during the encounter.

Fani-Kayode, who was recently criticised by Nigerians for verbally abusing a journalist who asked him a question during a press briefing, took to his Twitter handle to attack Tinubu.

He said, “‎That the Asiwaju of Bourdillon refused to stand up to greet the Ooni of Ife speaks volumes.This was not only deeply insulting to every Ife and indeed son and daughter of Odua but it is also a crying shame.

“Would a Northern political leader refuse to stand up for his traditional ruler?”

Daily Tracker reports that Fani-Kayode’s comments has ignited a debate on various social media platforms, with many people questioning his moral right to criticise Tinubu, after he refused to respond to a journalist’s question during his controversial trip to Calabar. ‎
‎