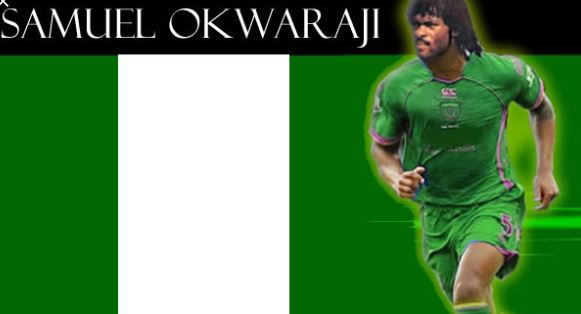 On this day, the 12th of August in 1989, one of Nigeria’s sporting horrors happened. The nation lost a rare gem in former Super Eagles midfielder, Samuel Sochukwuma Okwaraji on the field of Play.

The Green Eagles of Nigeria was Host to Angola in a must-win qualification match for the Italia 1990 World Cup. During the game a penalty was awarded to Nigeria. Augustine Equavoen stepped up and shot tamely, the Angolan goalkeeper saved it to the sadness of the Surulere crowd. Before halftime Etim Esin swung in a free kick, another late legend of Nigerian football Stephen Keshi scored a header into the top corner. Nigeria took the lead with the only goal of the game.

In the 81st minutes, while an injured Angolan player was being attended to, Nigeria’s Samuel Okwaraji suddenly collapsed faced down in front of 20,000 Nigerians at the Main Bowl of the National Stadium, Surulere, Lagos.

Unknown that he had died, he was stretched out of the field and was later substituted by Ademola Adesina and just like life, the match continued. In a rare Angola attack the Nigerian keeper David Ngodigha brought the forward down and the visitors were awarded a penalty. Ngodigha pulled off a remarkable save to preserve Nigeria’s slim lead.

The day remains the darkest in the history of Nigerian football as the 25-year-old died from what medical officials described as an enlarged heart and high blood pressure, following his collapse on the pitch.

The ill fated match at the Lagos National Stadium was Okwaraji’s first at the arena and it was the last time he lived. Today marks 31 years since his passing on.

He was born on the 19th of May, 1964 in Umudioka Orlu, Orlu Local Government Area, Imo State, Nigeria where he attended Federal Government College, Orlu and got both his Bachelor’s and Master’s degrees in International Law. He reportedly could speak five languages -English, German, Italian, Spanish and his native Igbo.

During the 1988 Nations Cup in Morocco, he scored one of the fastest goals past the Cameroonian goalkeeper all within 60 seconds. He was later named the Most Valuable Player (MVP).

Many Nigerians have clamoured for the late player who literally played his heart out for Nigeria to be honored.

On the 12th of August, 2009, Governor Babatunde Raji Fashola of Lagos State unveiled a concrete bust of Samuel Okwaraji in the Rededicated Memorial Garden in his honour in front of the same stadium where he died.

According to a reputable sports medium, former international Dr. Pat Ekeji who had handled the national team in 1985 and a former Director General of the National Sports Commission revealed that he cautioned against the fielding of the player who was on a visit home since the soccer season in Europe was on break.

The Nigeria Football Federation recently confirmed its readiness to implement proposals to retire the number 6 jersey in honour of the late player. On a live Sports show monitored, the NFF President Amaju Pinnick stated that the executive committee will look at retiring the iconic jersey of the late green eagles player.

Samuel’s mother, Lady Janet Okwaraji, died on the 8th of June 2020 at the age of 83. Mrs Okwaraji who lived in Enugu state, her home state was said to have died after a protracted illness. She died weeks after Minister of Youth and Sports Development sent Covid-19 palliatives to her alongside other parents of late ex-Nigeria internationals. The death of the matriarch of Okwaraji family was confirmed her eldest son, Patrick Okwaraji.